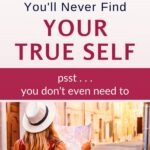 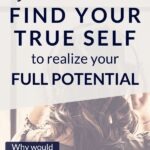 Benefits: Deliberately Think about what shapes “you.”

So That You Can: Stop trying to find your true self. Then use this knowledge to realize your full potential.

We all want to know why we’re here — what the purpose of our life is — and we all want to live our best life. We think we can gain this knowledge by finding our true self. Surely our true self will know and will tell us what we need to do to live the fulfilling life we were meant to live.

The short answer — yes and no ?. I’ll give you my long answer a bit later, but first, we need to discuss the 3 reasons I alluded to in the title — the reasons you will never find your true self:

Why Do You Think You’re So Special?

Ouch — again! This post is going to be full of some hard truths, so now would be a good time to safely stow your ego away until we finish our discussion. I promise, it will be there waiting for you when we’re done.

I ask this question because philosophers, artists, psychologists, scientists, and theologians have been trying to answer the question, “Who am I?” since the beginning of time. And they haven’t been able to come to a significant consensus. So why do you think you stand a chance of figuring out who you are?

Can you even define what “you” means? Are you your physical body? Your thoughts? Your soul?

That’s right — answering the question, “Who am I?” is basically impossible, and you’re probably not going to be the one to answer it.

Because it’s still possible to live a fulfilling life and realize your full potential without finding your true self. You can still gain an understanding of what influences the shaping of “you.” This understanding will allow you to know your true self as much as humanly possible. So let’s see if we can gain some of that understanding today.

Truer words, from the Nine Inch Nails song “Copy of A,” have never been spoken. Okay, I’m being a bit dramatic, but this gives me a great lead-in to discussing Reason #1 — you are an imitation of the people and society you surround yourself with.

From day one, we learn by observing other people. Psychologists call this type of learning observational learning (shocker) or modeling — the process of observing and imitating a specific behavior.

We start by mimicking our parents. We then move on to other family members and friends. Next, we mimic celebrities or other influencers. And this goes on and on throughout our lives with romantic partners, co-workers, mentors, etc.

We’re not necessarily modeling other people’s behavior because we want to be just like them. We do it because our minds and bodies are hardwired to survive in the most efficient way possible.

The people we choose to model have obtained something that we see as beneficial — safety, love, riches, fame. And the most efficient way to achieve the success that they have is to mimic their behaviors.

According to the American philosopher George Herbert Mead, we have to impersonate others in order to figure out who we are. From Lumen Learning:

For Mead, existence in a community comes before individual consciousness. First one must participate in the different social positions within society and only subsequently can one use that experience to take the perspective of others and thus become self-conscious.

In other words, we develop a sense of self by taking on the roles of others, or mimicking them. Which means that reaping the same benefits that other people have isn’t the only reason that we model them; we’re also trying to figure out what societal role will lead us to our own consciousness.

The question then is, is this sense of self your true self? How can you be your true self if you are constantly modeling everyone else’s behaviors? I’ll attempt to answer this question, but first, let’s talk about reason #2 . . .

The Only Thing We Can Count On

Is change, right? Which leads us to Reason #2 that you will never find your true self — you are a collection of constantly changing parts.

This a pretty basic truth, but one that we don’t stop to Deliberately Think about very often. The most obvious changes we experience are those to our physical bodies, but we are constantly changing in other ways too.

For instance, the pathways in our brains are constantly changing, as noted by psychologist Karen Young in a post she published on heysigmund.com:

Every thought, feeling and action creates a pathway in your brain. . . . Whenever you do something over and over, that pathway becomes stronger and stronger. The stronger the pathway . . . the easier that behaviour, thought or feeling will be.

Plus, our circumstances are always subject to change. At the moment, I’m fortunate to say that I’m sitting in a very comfortable house, I’m experiencing no serious worries at the moment, and I’m preparing to share my thoughts with the world. Now those are some great circumstances! But this state of affairs could change any minute. I’m well aware of this fact because it’s happened to me before. (To find out what I mean, read: Confessions of a Safety-Holic (Now in Remission).)

When your circumstances change, your behaviors, thoughts, and actions change. Heck, your physical body changes too. So does that mean your “self” has changed? How can you be your true self if you are a collection of constantly changing parts? Again, I will attempt to answer this question, but we have one more reason to talk about first.

“You have to be willing to lose your life in order to find it.”

That’s right; this is a quote from my main man Jordan Peterson. (You knew I wasn’t going to make it through a post without referencing Peterson or Maslow ?.) And it ties in with Reason #3 — you have to be willing to make a great sacrifice.

But how many of us ever make a “great sacrifice”? It’s hard enough to make small sacrifices, like walking past that plate of freshly baked cookies because you’re trying to lose weight. Or, exiting Netflix before it automatically starts playing the next episode because you were going to read today. And how about ignoring that blinking red light on your phone so you can focus on getting your work done?

I’ve made a couple of sacrifices in my life that seem “great” to me. They’re probably not that “great” in the scheme of things, but I can attest to the fact that each one has brought me one step closer to finding my true self.

The question is, are any of us actually capable of making a sacrifice great enough to find our true self? And, even if we are capable, how do we know that the self we reveal is our true self?

Finally! It’s time to get to the answers.

One way to define the term “true self” is to think of it as being synonymous with “core values.” Much like your core values, your true self never changes even though your interests, preferences, attitudes, and behaviors do.

With this definition in mind, picture Mr. Potato Head, and imagine that your core values are the potato.

** How can you be your true self if you are constantly modeling everyone else’s behaviors? **

Mr. Potato Head has tried on many different outfits: a man, a woman, Disney characters, and, yes, he was even Batman once. But at the end of the day, he’s still a potato. The same is true for you and me.

I too have tried on many different behaviors (outfits) — an accountant, a writer, a wife, a mother, and, yes, I was even a Mary Kay salesperson once. When I wore each outfit, I wasn’t always presenting my true self because I was modeling other people’s behaviors. But, at the end of the day, no matter which outfit I’m donning, I always end up seeking authenticity in my life (my core value).

** How can you be your true self if you are a constantly changing collection of parts? **

You have experienced physical changes, psychological changes, emotional changes, environmental changes, and on and on. And even though these parts of yourself have changed, your true self — your core value — is the one thing that remains constant.

** Are any of us actually capable of making a sacrifice great enough to find our true self? **

Perhaps. If we use my definition of true self, the answer is yes.

For example, I sacrificed my career as a CPA to create this organization. Why? There are many reasons, but they all come back to the same answer — my authenticity (core value) was being compromised, and, in turn, my psyche was suffering the consequences. The only way to buttress my authenticity, my true self, was to sacrifice the safety and security of my career.

Did the sacrifice work? That’s left to be seen, but I can tell you that I feel much more like my authentic self than I ever have in my entire life.

So, I’ll Never Find My True Self?

Sure, this understanding of your core values will allow you to know your true self as much as humanly possible, but that doesn’t mean that you or I are right about who “you” are.

So what do you do now? Stop trying to find your true self. Instead, focus on personifying your core values, and I bet you’ll end up realizing your full potential along the way.

If you need some help naming your core values, click here.

I put a worksheet together for you that summarizes this post and will help you go from inspiration to action, so be sure to check that out.

Click here for more posts with a “live fulfilled” theme.

The Bobo Beatdown: Crash Course Psychology #12, posted to YouTube by CrashCourse on 4.28.14

What Sacrifice Means – Jordan Peterson, posted to YouTube by Jocko Podcast on 3.30.18

“THE GREAT SACRIFICE” – How To Improve Yourself Right NOW | Jordan Peterson Motivation, posted to YouTube by SUCCESS CHASERS ON 1.27.20

The Self and Socialization, Lumen Learning

“You have to be willing to lose your life in order to find it.” Jordan Peterson, posted to YouTube by TheArchangel911 on 9.12.18

Find Your True Self P 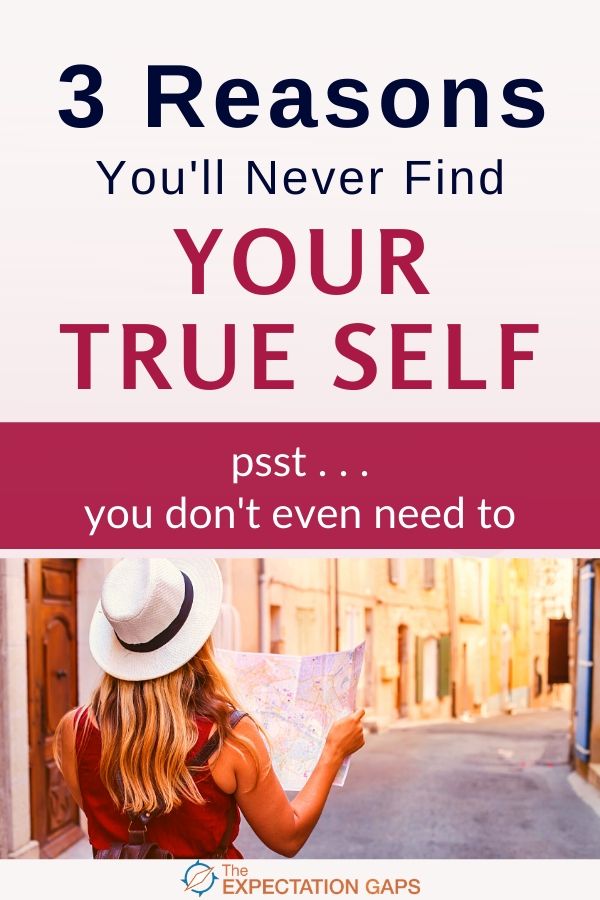 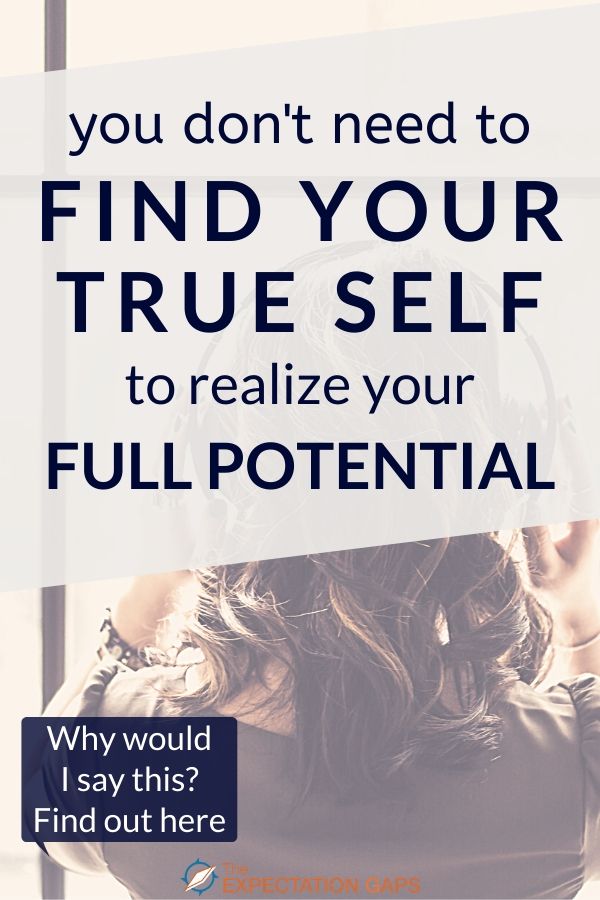