Why Is It So Hard to Create a Positive Mindset? 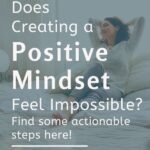 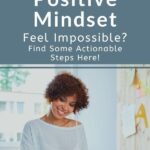 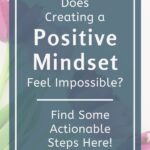 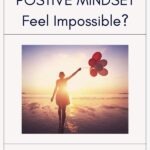 Benefits: Recognize the reasons it’s so hard to create a positive mindset.

So That You Can: Form daily habits that will empower you to create a positive mindset.

Why Is It So Hard to Create a Positive Mindset?

You just have to look on the bright side — find the silver lining — think good thoughts! Because if you do, that positive mindset will make all of your problems magically disappear, right? Isn’t this what we’re led to believe by the well-meaning people who utter these words when they don’t know what else to say? And haven’t we all used these words ourselves in an effort to offer encouragement or support to someone who is suffering?

But it’s not that easy is it? In fact, creating a positive mindset can feel downright impossible some days. And then what happens? You end up in a self-defeating cycle. You ask yourself, “Why can’t I think more positively? What’s wrong with me?” In turn, those thoughts make you feel like a failure; like you’re somehow less than your well-meaning counterparts who are telling you to let the sunshine in. And, you end up feeling even worse. It’s like the hole of negativity you’re in is made of sand, so as you try to climb out of it, you’re just covered in more sand — more negative thoughts.

Still, we want to create a positive mindset because there are too many benefits to ignore — benefits to our physical state, our mental state, and our overall well being. Benefits that will help us realize the fulfilling life we were meant to live. Plus, we only get one chance at this crazy thing called life, so we might as well try to enjoy it, right?

Then let’s stop kidding ourselves and believing the hype. We can’t just turn a positive mindset on like a faucet and expect it to wash all our negative thoughts away. There’s no shortcut; no magic pill. It’s going to take a lot of Deliberate Thinking, effort, and practice. And we’re going to start today by discussing:

I can say with absolute certainty that if you stick around, by the end of this essay you will have learned every single thing you’ll ever need to know about a positive mindset. (You didn’t buy that did you? Just checking. ?) But seriously, I hope that you’ll be empowered to create at least one daily habit that will get you closer to living the fulfilling life you were meant to live.

Kind of . . . and this is one of the reasons it’s hard to create a positive mindset.

I don’t know that our brains actually “favor” negative thoughts, but psychologists have found that our minds are built to look for negative information. Which makes sense if you think of it from a survivalist’s perspective. As a survivalist, you’d want to root out any threats to your safety, and sitting around thinking about rainbows and kittens isn’t going to help you do that.

The thing is, if you’re reading this, you’re probably not living in survival mode, and your mind doesn’t need to be on the alert for negative information all the time. But that’s how it’s been conditioned to operate. In studies performed by psychology professor Alison Ledgewood, she and her team found that:

Once we think about something as a loss [negatively], that way of thinking about it tends to stick in our heads, and [it] resists our attempt to change it.

The positive news? You can retrain your mind! Neuroscience tells us that every thought you have creates a pathway in your brain, whether it’s positive or negative. And the more you use that pathway, i.e. reinforce that thought with related thoughts, the stronger it gets.

So, yes, you can create positive pathways, but that means you’re going to have to start paying attention to the thoughts that you are allowing to be pumped into your head. Which leads us to another reason it’s so hard to create a positive mindset . . .

Negative Messages Are All Around Us

I think we all know this, but knowledge alone isn’t going to help us create a positive mindset. We have to remain mindful at all times. We have to become so aware that we instantly notice when a negative message is trying to create a pathway in our brain. So let’s start by recognizing how and why some of these negative messages are presented to us.

First, if someone’s trying to sell you something — whether it be a car, a cosmetic product, or a news story — there’s a good chance that a negative message is hiding in the sales pitch somewhere. Marketers know full well that our minds tend to focus on negative information. And they’re very good at making us feel a false sense of scarcity and/or fear so that we’ll develop a “need” for whatever they’re selling. Keep this in mind the next time you come across an advertisement, and see if you can spot the negative message.

Another way negative messages are presented to us is in the form of sarcastic or belittling comments. These types of comments are a way for the messenger to bolster themselves a bit because they’re feeling insecure in some way. And even if the messages aren’t aimed at you, think of all the sarcastic and belittling comments you stumble across on a daily basis that worm their way into your subconscious. From personal conversations to social media posts to television shows to you name it, each one is riddled with negative messages. So how do you avoid them?

Well, you can’t. But you can remind yourself that someone else’s opinion has very little to do with you, or whomever they’ve formed an opinion of, and much more to do with their lived experience. When you remind yourself of this, you will be able to disengage from the negative interaction. Then, you won’t take the negative messages personally, and, more importantly, you won’t allow the negative messages to fortify a pathway in your brain.

We Love Our Comfort Zones

Yes, believe it or not, this is another reason it’s so hard to create a positive mindset. Even though all those negative thoughts and messages we just talked about don’t make us feel very good about ourselves or others, there’s some comfort to be found in repeating a familiar thought pattern or latching on to a familiar world view.

So we’ve created a comfort zone of negative thinking, so to speak. A safe space where all the negative thoughts our minds seek out and the negative messages we’re surrounded by reside. It feels familiar to us because we’ve been immersed in this space since the day we were born and because most of the people we interact with on a daily basis are living in this space as well. And to create a positive mindset, you have to break out of this comfort zone and leave your safe space.

As crazy as this may sound, that you would choose to live within a negative safe space, we all do it. As I write this, I’m reminded of a time in my life when I was dealing with depression. I remember reading something about people clinging to their depression, or grief, because it becomes a part of who they are; it becomes comfortable. And I recognized that I was feeling that way about my depression a bit, and that realization helped me come out of it.

Now, you might not be dealing with depression or grief, but if you stop to think about it a moment, I’ll bet you can identify a negative thought pattern or world view that you’re clinging to.

There are 4 Pillars of a Healthy Mind, according to psychologist and neuroscientist, Richard J. Davidson, PhD. And, it stands to reason that a positive mindset and a healthy mindset go hand-in-hand, so we can use these pillars as the foundation for our positive mindsets.

This all sounds great, but how can you empower yourself to create a positive mindset?

As I mentioned at the beginning of this essay, creating a positive mindset is going to take practice — a lot of practice — because we’re all surrounded by so many negative influences. And, staying out of your negative comfort zone is going to require daily maintenance. So here are a few simple habits you can implement today:

Commit to the process of creating a positive mindset. Realize that it’s not something you’re going to achieve overnight; it’s something you’ll have to work to maintain every day. And, yes, some days are going to be easier than others.

Start calling yourself out when you notice that you’re looking for negative information or getting caught up in all of the negative messages you’re surrounded by. You’re going to slide into your negative comfort zone every day, and that’s okay. The goal is to recognize when it’s happening so you can learn from that experience. And every time you do, it will be that much easier to come back to your positive mindset again.

Above all, be patient with yourself and focus on progress, not perfection.

If you’re ready to make some progress, be sure to take advantage of the worksheet I put together for you that will help you sort through the ideas introduced in this essay.

Here’s a link to the post I referred to above that discusses the connection between meeting our love/belonging need and realizing our full potential: A Practical Introduction to the Power of Intentional Living

Getting stuck in the negatives (and how to get unstuck) | Alison Ledgerwood | TEDxUCDavis, posted to YouTube by TEDx Talks on 6.22.13

How mindfulness changes the emotional life of our brains | Richard J. Davidson | TEDxSanFrancisco, posted to YouTube by TEDx Talks on 12.12.19

The Best Mental Health Advice I’ve Ever Heard – Johann Hari, posted to YouTube by FightMediocrity on 6.18.20

Jordan Peterson on Why People Are So Unhappy, posted to YouTube by H3 Podcast Highlights on 11.16.17 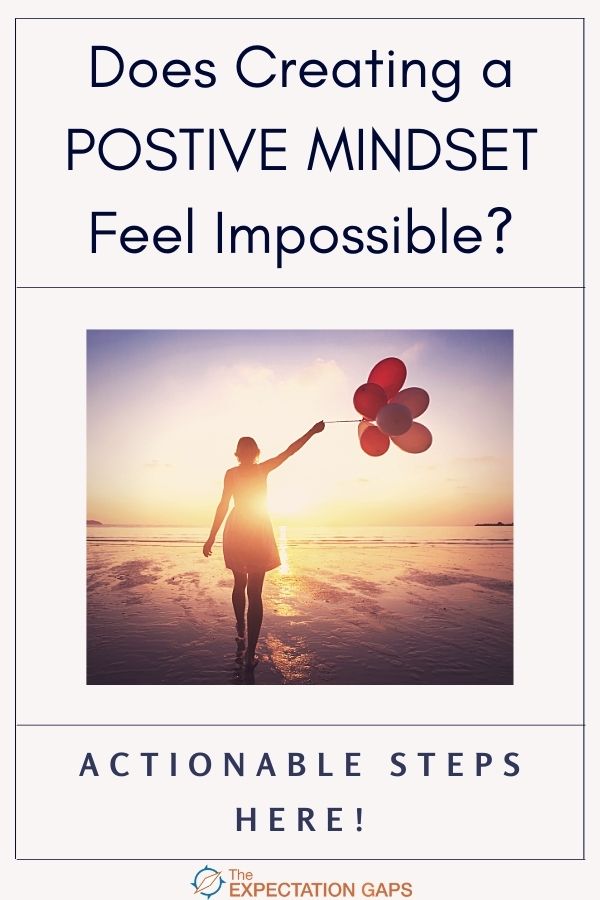 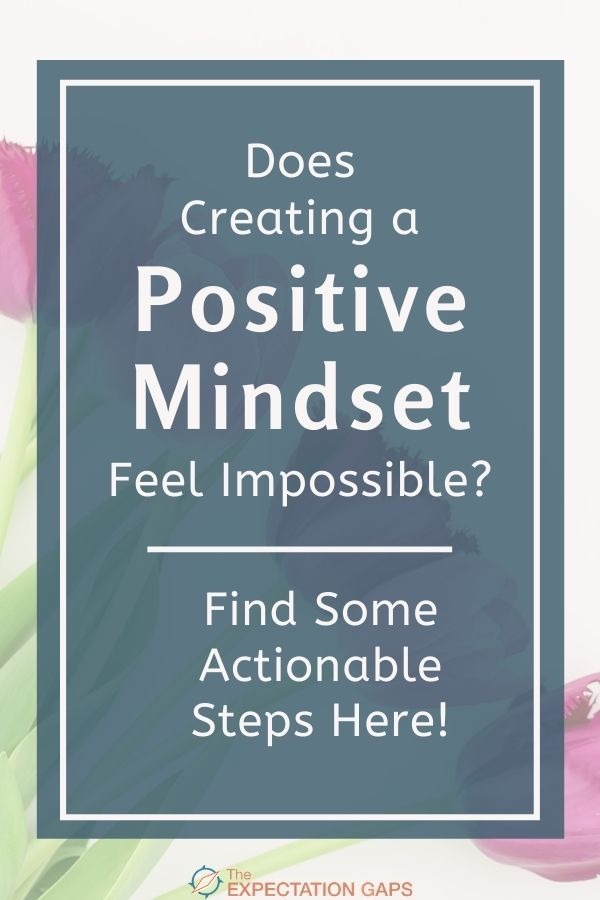