Avoid the Tragic Consequences of Being Easily Offended 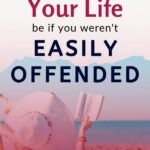 Benefits: Recognize what triggers you to feel offended and why.

So That You Can: Face the limiting beliefs that cause you to feel offended and live the fulfilling life you were meant to live.

Avoid the Tragic Consequences of Being Easily Offended

It’s no secret that the U.S. population has become more easily offended than ever before.

Whether or not this statement is true isn’t for me to decide. But, if you’re being smacked in the face by Twitter rants, reality TV, and the 24-hour news cycle, there’s a pretty good chance that you’ve come to this conclusion.

I do my best to stay away from all of that noise, but I’ve started to notice how easy it can be to offend the people I spend my time with (myself included!). I’ve started to wonder what the underlying cause of this reaction is. And I’ve noticed that there are times when I can rationally say to myself, “There’s no reason to be offended by that,” but I still feel the sting of offense for some reason.

Then my brain took things a step further, as it tends to do ?, and I started thinking about some of the consequences that could result from allowing ourselves to be easily offended — both as individuals and as a society. My pondering and research has led me to realize that some of these consequences are pretty dire.

I’m beginning to realize: the same limiting beliefs that cause us to feel offended could be the ones convincing us to settle in our lives. That’s why, as Deliberate Thinkers who are committed to living the fulfilling life we were meant to live, we need to:

3 Truths We Need to Accept

There are three truths that we need to accept before we can begin to understand what triggers us to feel offended. If you Deliberately Think about each of these truths, they are irrefutable. However, that doesn’t mean that they’re easy to buy into, especially when our expectations and ego decide to exert their influence over our thoughts and feelings.

I wanted to introduce these truths so that, as we continue this discussion, we can come back to them and use them to anchor our thoughts.

Is Being Easily Offended Really Such a Big Deal?

I’m going to focus on the personal consequences of being easily offended, but these consequences could be extrapolated to society as a whole. That’s when things get really scary, but that’s not what this post is about. Then again, maybe it is because we change society by changing one person at a time, hmmm…

Consequence #1 - You Lose Your Sense of Self

There are going to be times when someone discredits your core values and what you truly stand for. In those instances, it may be worth your time and energy to take offense.

But, most of the time, we are offended by things that we really don’t care that much about. Why? Because we haven’t taken the time to define what our core values are, what’s truly important to us. So our egos create an identity based on what we think other people think of us, and that identity triggers the feeling of offense.

(You can learn more about this illusion that our egos create here.)

For example, as an accountant, people expect me to be shy and timid. I am neither of these things, and I know this. However, before I took the time to better understand myself and my core  values, I would take offense when someone spoke about being shy as if it’s a bad thing.

I had this reaction because my ego was telling me that I must be shy; that’s what everyone expects from an accountant. I allowed myself to be offended by the comment even though it had nothing to do with who I truly am.

Let’s take this one step further. I could also identify myself as part of a group of people — accountants. If I prioritize this group identity over my individual identity, I will be offended when any other accountant is offended or discredited. My ego will tell me, “If you offend one accountant, you’re offending all accountants.”

However, if I weren’t self-aware enough to realize this, it would be pretty easy to fall into the trap of owning a group identity. This trap is an easy one to fall into because it feels good to belong to a group. It makes us feel protected in some way.

Here’s the tragic consequence though. The more times you allow yourself to be offended based on other people’s expectations, or a group identity, the further you get away from knowing your true self.

You lose yourself, one push at a time, until you’ve fully adopted the group mentality. All sorts of tragic consequences can occur once you adopt a group mentality and stop thinking for yourself. (For a further look at group influence, read: Don’t Drink the Kool-Aid: 3 Cautionary Tales of Group Influence.)

Consequence #2 - You Lose Your Compassion & Empathy for Others

We tend to feel like everyone is out to get us. You may be shaking your head right now, but think of the messages that have been pumped into your head since the day you were born.

We hear words like, “It’s a dog-eat-dog world,” and we see countless images of people, both real and fictional, ruthlessly making their way to “the top.” We are cautioned by our parents, “Don’t talk to strangers.” We become fascinated by crime TV, which would lead us to believe that there is a murderer, kidnapper, or rapist on every corner.

These messages shape our view of the world and can lead us to believe that everyone is out to get us. When, in reality, the people who are out to get us are the exception, not the rule.

What does this have to do with being easily offended? The more you believe that other people are out to get you, the more you will see malice in their words and actions, which will trigger you to take offense. You will take for granted that they are trying to destroy you and will perceive comments or actions that have nothing to do with you as slights.

Eventually, as this goes on day after day, you forget to have compassion and empathy for others. You don’t stop to think, “Maybe Amanda was impatient with me because she’s having a bad day. I wonder if there’s something I could do to help her.” Instead, you think, “Amanda is driving me crazy today. It must be because I took her parking spot this morning. What a bitch!”

It sounds crazy when you see it in writing, but come on, we’ve all had completely irrational thoughts like this before. We become offended by something that didn’t actually happen; it only happened in an alternate reality that we created.

[People] are not against you; they are merely for themselves.

Consequence #3 - You Don’t Have Important Conversations

I’m going to start this section off with a quote because it’s a pretty powerful one:

You can’t say anything about anything important, ever, without offending . . . important speech about important issues . . . is instantly offensive.

We see this happen all the time when journalists ask an someone an important question that they are ill prepared to answer. Most of the time, the interviewee will quickly change the subject, and it’s usually changed to a subject completely unrelated to the original question.

But, this also happens in our personal lives all the time. For example, someone asks you, “Why are you so grumpy today?” Instead of engaging in an important conversation that would start with, “Well, I was hoping to spend more time with you, and I’m really disappointed that you have so much going on,” your response might be, “I’m just tired. Everything’s fine.” Because you’re scared of offending the other person by making them feel like they’re doing something wrong, and you’re scared of having your feelings attacked by the other person.

Next, the other person might ask, “Why are you so tired?” “I didn’t sleep well last night.” “Why didn’t you sleep well?” Now, all of a sudden, the subject of the conversation has changed completely. You’re not going to have the important conversation that you need to have about missing this person.

The tragic consequence of this is, if you don’t have important conversations with the important people in your life because you’re worried that one of you will be offended, you will eventually become divided from those who mean the most to you.

Hopefully, you’ve gained some insight into what triggers you to take offense through this discussion. If you could use some help to figure it out, check out the worksheet I put together for you.

And, we discussed three tragic consequences of being easily offended.

Now, we need to figure out what we can do to avoid these consequences. I’ll offer three action steps:

If you found value in this post, please consider supporting us for as little as $1 by “buying me a coffee” on Ko-Fi. Click on the “Support Us” button in the lower left-hand corner.

I’d like to know what you agree or disagree with in this post. What would you add to the conversation? Do you think being offended easily has harmful consequences, and why?  Please let me know in the comments. I won’t be offended – HA! No one will have access to your email address except for me, and you can enter a username if you prefer.

How To Not Take Things Personally | Don’t Get Offended, posted to YouTube by Julia Kristina Counseling on 8.16.17

Jordan Peterson: Free Speech & the Right to Offend, posted to YouTube by ABCLibrarySales on 3.14.18

Tyranny, one tiny step at a time – How ideology, group identity & collective guilt destroy societies, posted to YouTube by Gravitahn on 12.02.16 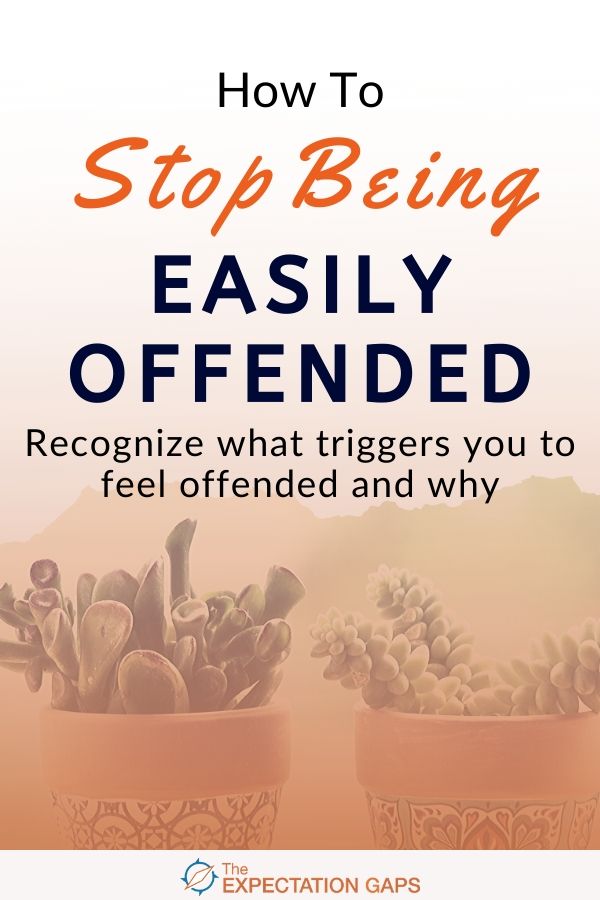 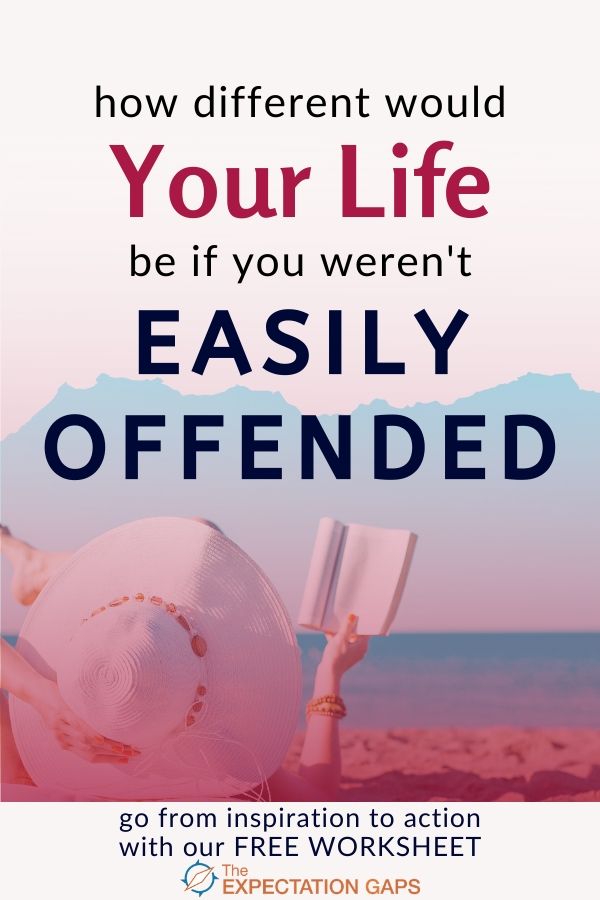