Benefits: Discover why you aren’t decisive and gain some tools that will help you make tough decisions effectively.

So That You Can:  Become a confident decision maker.

You need to make a decision, TODAY! The pressure’s on. How do you react?

Do you take a deep breath, Deliberately Think about your options, and take the next step?

Or, do you have a panic attack, go into overthinking mode, and procrastinate?

If you can relate to the second scenario, this post is for you! I’m going to introduce you to a powerful, 3-step process that will transform you into a confident decision maker.

Why We Are Horrible at Making Decisions

We are horrible at making decisions because we don’t stop to consider our “Why” for making that decision. Once we understand our Why, the answer will be obvious.

Why don’t we stop to consider our Why? (Yes, I’ll be using the word Why a lot in this post ?) Because we learned at a young age that asking Why is a bad thing to do.

As kids, we asked “Why?” because we were naturally curious, which made us efficient decision makers. We’d gather information and make a decision. Granted, it may not have been a “good” decision, but that was only because we lacked experience.

The point is, we didn’t overthink our decisions. We said, “Here’s the information I have, and it tells me I should do this.” Simple.

But, after the adults in our lives screamed, “Because!” at us enough times, we came to believe that we weren’t supposed to ask questions. So, as adults, we don’t practice asking critical questions.

How the heck are we supposed to be good at decision making if we’re not good at asking questions?

Why We Are Horrible at Asking Questions

We’re admonished for asking, “Why?” when we’re kids, but, as we continue into adulthood, we’re made to feel like lepers if we ask “Why?” I say this from experience.

I tend to have a constant loop of questions going through my head. Occasionally, I let one of these questions slip through my lips, and I’ve discovered that, generally speaking, people don’t like being asked questions.

So, they don’t ask all the questions they would like to. And what happens? We end up wasting more time in the long run because we didn’t ask the pertinent questions up front.

Even now, you’re probably like, “Get to the point! I just want the 3-Step Process for crying out loud!” I know; I get it. But I’m telling you, the process isn’t going to work unless you understand why you’re such a horrible decision maker to begin with. So stick with me for a bit ?.

Another reason we don’t like being asked questions is because they might highlight our ignorance. It took me awhile to figure this one out. I can recall numerous times when I asked someone a question like, “Why are we doing X this way?” and they interpreted it as a challenge.

For a long time, I didn’t understand why I was receiving this response. I’m not a confrontational person. I’ve been told by many people that I’m approachable and that I make them feel at ease. So why in the world were my questions being seen as antagonistic?

I didn’t think it was my approach, and now I’m sure that it wasn’t. The problem was that I had inadvertently pointed out someone else’s ignorance. They had no idea why we were doing X this way and had either never thought to ask or didn’t ask because someone was becoming impatient with them.

Maybe you’ve run into similar situations. And what did you eventually do? Probably the same thing I did; you stopped asking questions and just did what you thought you were supposed to do.

How Do We Make Deliberate Decisions?

We’re almost there . . . just one more thing. In order to complete the first step, you’ll need to name your core values. If you haven’t named your core values yet, this post will help you do so: 3 Reasons You Need to Name Your Core Values

Time to Bring it Home

Let’s walk through a real-life example to see how the 3 steps would play themselves out. I’ll use an example from my 9-5 days as a CPA because I’m guessing that you’ll be able to relate to it — you make a mistake at work and have to decide how to deal with it.

In my case, I screwed up my client’s estimated tax payment calculation. Meaning, not only did they owe additional taxes, they also owed penalties and interest. I had to decide how I was going to break the news to my client and maintain the relationship at the same time.

Rather than procrastinate or make a rash decision, I followed the 3-step process and gathered the information that I needed to make a deliberate decision.

#1 - I consulted with my core values

My visceral reaction was to protect myself and figure out how I could cover up or “spin” my mistake, but I knew that wasn’t the right answer. Why? Because my core value of authenticity told me so. As I consulted with that value, the only option it gave me was to own up to the mistake I had made.

#2 - I considered the expectations that were influencing my decision.

I had at least three expectations to consider. (1) My own: I was expecting myself to be perfect, and that’s part of the reason I was hesitant to face my error. (2) My boss’s: I knew that my boss didn’t expect me to be perfect. He had told me as much and had made similar mistakes himself. (3) My client’s: My client expected me to perform my work with accuracy, but he also expected honesty and integrity from me.

As I considered these three expectations, I knew that I needed to let go of my self-inflicted expectation of perfection. No one else was expecting perfection, but they were expecting authenticity. Again, the only option I had was to own up to the mistake I had made.

#3 - I decided if I was willing to accept the worst possible scenario.

If I told the truth, the worst possible scenario was that I would be fired, and the client would take their business elsewhere.

If I covered my mistake up somehow, the worst possible scenario was that it would eventually be found out. In this scenario, I would not be given the benefit of the doubt and would be fired.

Either way, I would end up being fired, so the question really was, “Am I willing to accept the fear and regret of keeping my secret under wraps?” Once again, my core value of authenticity would not let me accept that outcome, so I had to own up to the mistake I had made.

What was the actual outcome?

Now that I had identified my “Why” for making this decision — to personify my core value of authenticity — I took the next step.

I humbly went to my boss, explained the situation, and asked if the firm would cover the client’s penalties and interest. He said yes, without hesitation; like I said, it’s not like this had never happened before.

I explained the situation to the client, apologized, and assured him that we were taking care of our end of the bargain by covering the penalties and interest. He understood, and life went on as usual.

But, if I hadn’t used the 3-step process, this situation could have become much more complicated than it needed to be.

An Even Simpler Solution

You might not even need to go through the 3 steps if you learn to listen to and trust your gut. Your gut will tell you if you’re making the wrong decision. You know what I’m talking about. We all do, but our expectations and ego tend to get in the way.

That’s why the 3 steps are such powerful tools.

What Decision Are You Facing?

Think about a decision that you need to make. How can you apply the 3-step process?

Your decision might be more complicated than mine was. You might need to gather more information and ask people questions. But do yourself a favor, and take the time to go through the process. You won’t regret it.

And, of course, we won’t leave ya hangin’. We’ve created a worksheet to help you gather your thoughts.

Click here for more posts with an “intentional living” theme.

Do you have any steps to add to the process? Another process that works for you? Please share your thoughts with us in the comments! No one will have access to your email address except me, and you can enter a username if you prefer. 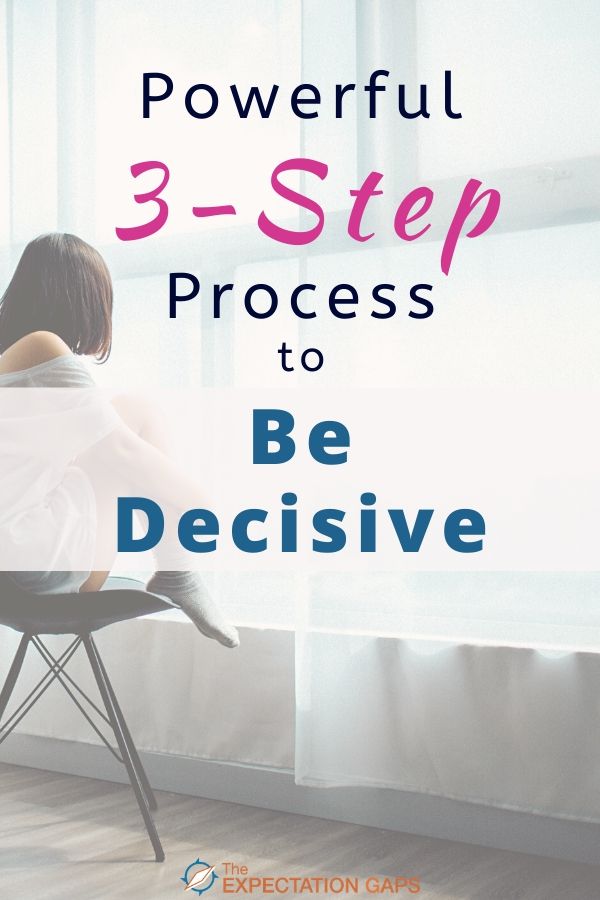 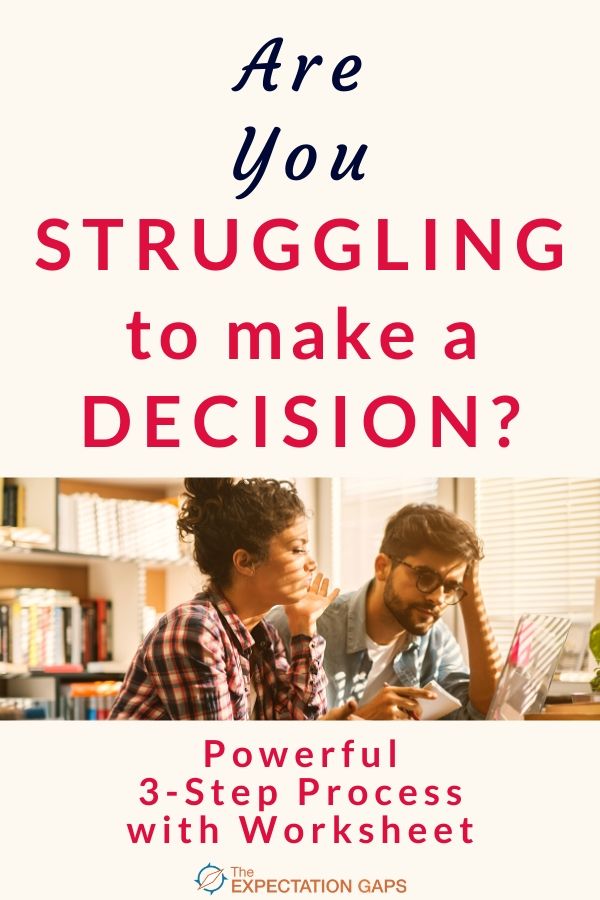 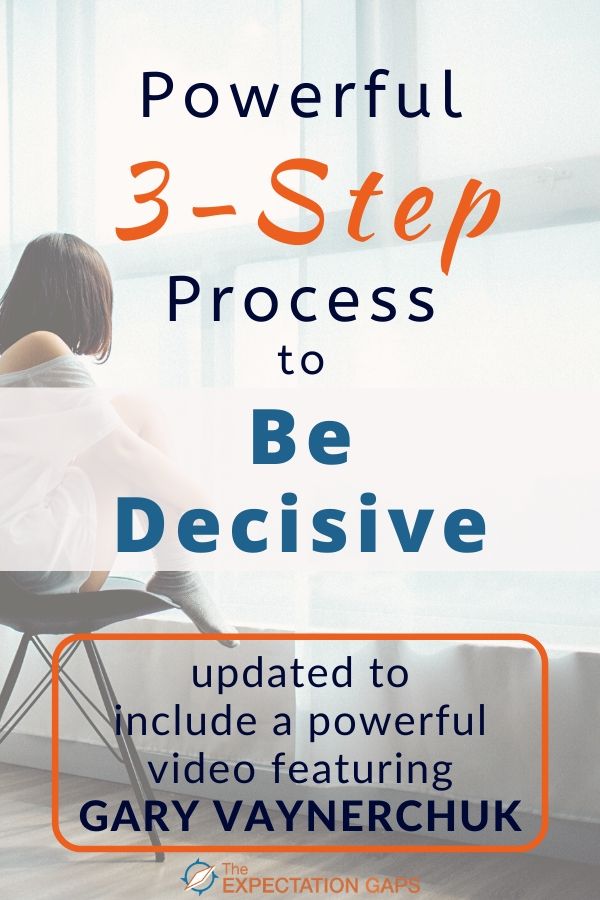