Stop Worrying About Privilege and Be Grateful

So That You Can:  Begin to recognize and accept your own privileges and focus on being grateful for them.

Stop Worrying About Privilege and Be Grateful

You are privileged. If that statement made the hairs on the back of your neck stand up a bit because you feel offended or ashamed in some way, stick with me! I’ll explain why I say this. Plus, I’ll explain why it’s important for us to recognize, understand, and accept our privileges.

I was inspired to write this post because I’m sick of hearing the term privilege, especially “white privilege,” thrown around as if anyone knows what it even means. All this term does is lead to misunderstandings and preconceived notions that widen the gaps between us.

So I offer this post to encourage Deliberate Thinking and increase our collective understanding of what it means to be privileged. In addition, I hope that we can stop worrying about who is and who isn’t “privileged” and focus on being grateful for the many privileges that we have.

Our definition of privilege and our response to the word is the problem. As a society, we are allowing this word to steal our power. Let’s take our power back!

Your power lies in admitting that privilege exists, accepting it as part of the human condition, and understanding how it impacts your life and the lives of the people around you. The first step toward taking your power back is understanding the response(s) you have when you hear the word privilege.

Your response to hearing the word privilege could be to deny that you are privileged. Okay, I think I understand where you’re coming from, but I think this response is based on a different definition of privilege than is commonly used today, so we’ll discuss that.

Another response could be to realize that you are privileged and to then feel guilty about it. If you can objectively look at privilege without becoming defensive (which is extremely hard to do by the way), you’ll see that privilege is nothing to be ashamed of. More on that to come.

Yet another response could be to blame someone who you perceive to be more privileged than you for your lot in life. Honestly, I can’t speak to that response from personal experience because, in my opinion, I have experienced a lot of privilege in my life. So, I won’t address that response other than to say:

When you blame others, you give up your power to change.

Lastly, your response could be to accept that you are privileged and to choose how you are going to use that privilege to realize your full potential. That’s the response we want to have!

We Are Not All Created Equal

Case in point, I don’t have the natural, physical strength that most men my size have. That’s just a fact of life. Could I gain comparable strength if I were willing to? Sure, but I’m not willing to, so I shouldn’t expect to have equal access to opportunities that require physical strength.

Let’s take this example a bit further. If I want to join a men’s hockey team, I have to accept the terms that come with that opportunity. I’ll have to take the same hard hits as the men. I’ll have to be able to shoot the puck as hard as the other players, or I might not get equal playing time. And I’ll have to be ready to take a punch in the face from an opposing, male player.

Although I should be given a chance to prove myself, I shouldn’t expect the team to give me equal playing time unless I put in the work to get stronger, and that work might be harder for me than it is for a man. I can respond by saying, “That’s not fair”; or I can respond by accepting it for what it is and exercising my equal right to pursue something that I’m better suited for.

Can These Hockey Players Deny Their Privilege?

They are naturally bigger and stronger than me because their hormones and body structures are different than mine. As boys, they were taught to be “tough,” while I was taught to be soft and kind, so they have that going for them. And, let’s pretend that their parents had more money than mine did, which made it easier for them to afford all of the costs that come along with playing hockey.

I don’t think there can be any disagreement that these male players have advantages over me. The question is, are these advantages privileges? I say yes.

If you disagree, you are probably using a different definition of privilege than I am, so let’s iron that difference out.

According to the MacMillan Dictionary, privilege is:

1. a special benefit that is available only to a particular person or group

1.a. something nice that you feel lucky to have

In this example, the players definitely have a special benefit (strength), and it is, generally speaking, only available to a particular group (males). It is something nice that they should feel lucky to have because it affords them more opportunities to play the sport that they love.

In my opinion, their strength meets the definition of privilege, but there is nothing “bad” or “oppressive” to be found in this form of privilege. It’s simply biology.

The Common Definition of Privilege Has Changed

Now, if you, or the players themselves, are still trying to deny that they are privileged, it’s probably because you think being privileged means that everything comes easily to you. And, on the contrary, these players have worked hard to get where they are. No one handed them anything. They went to practice three nights a week, played at least two games a week, worked out in between, and went to every summer camp available, for years. How dare I call them privileged!

Yes, that’s how we once used the word privilege, but as a fellow blogger, Doug Muder, points out:

. . . we use the word privilege differently than we used to. . . . privilege [used to be] a kind of abnormality: Being privileged meant that you didn’t have the same worries as ordinary people.

But, as Doug also points out, the way that we use the word privilege today is:

. . . fundamentally different: It’s the privilege of being seen as normal. You still have to follow the rules, do the work, pay the bills, and so on, but whoever set the system up had people like you in mind. So the effort you put in has a chance to succeed. You weren’t born at third base; you had to hit the ball and run like all the other players. But nobody challenged your right to have a turn at bat.

Back to the hockey analogy. These players definitely have to follow the rules and do the work, but there is a system in place to provide ample opportunity IF:

How do I know? My 13-year-old step-son has played hockey for nine years. He is “normal” within that system and has privileges that allow him to play hockey when other boys his age can’t. His effort has a chance to succeed. Does he work his butt off? Yes. But whether he knows it or not (he doesn’t yet ?), he is privileged and should be grateful that he is.

Are you starting to see now that privilege does exist in our society, maybe even “white privilege”? And that it’s not necessarily a bad thing if it’s used for personal growth rather than oppression.

There’s No Need for Shame

Again, assuming that you’re using your privilege for personal growth and to lift others up, rather than to oppress them.

Political analysts have reported an increase in the amount of white people, white liberals specifically, who feel extreme “white guilt.” In particular, they feel guilty for ignoring issues of race, that have recently been brought to the forefront, for so long.

I get it. I feel a bit of that too. If you are a privileged, white person (using the “new” definition of privileged) and have even an ounce of empathy, I’ll bet that you have felt a bit of this guilt too.

However, feeling guilty isn’t going to help anyone, including yourself. How you choose to react to that feeling will. So let’s look at privilege objectively for a minute.

You didn’t choose to be born into the life you were born into, just as those who are oppressed didn’t choose to be born into that life. You may have remained blind to your privilege much longer than they remained blind to their oppression because that’s just how humans operate. We naturally focus on what’s wrong with our lives — what we’re missing, what’s unfair — more than we focus on what’s right.

So much so, that we forget to recognize the privileges that we have, and if we don’t recognize them, there’s no chance that we can be grateful for them. Plus, there’s a good chance that we’ll continue to oppress people who weren’t so fortunate in birth because we don’t even realize that we are part of the oppression.

We’ve all had these thoughts cross our minds and lips. Yes, even me. Why? Because admitting otherwise leaves us vulnerable. But I can tell you with certainty, that when faced with true adversity, you will never react the way that you think you will.

That’s why it’s time to accept the fact that we don’t know the best way to deal with other people’s experiences; that our way of doing things isn’t intrinsically better than anyone else’s. Think of how much useless, denial-inducing guilt could be alleviated just by accepting those two things.

Then we could begin to use our privilege for good. We could use it to spread love and compassion (or, as I described it in one post, put more God into the world). We could use it to embrace The Cycle of Deliberate Thinking. And, as an added benefit, we might just realize our full potential.

Where Do We Go From Here?

We stop worrying about privilege and start being grateful, of course ?. But how?

Hopefully this post has helped you gain a better understanding of privilege and helped you begin to accept your own. The next step is to work on becoming comfortable with discussing privilege. But that’s going to be tough because it’s not something we ever practice doing. It’s going to require some Deliberate Thinking.

Luckily, I created a worksheet to help you practice.

Comment time . . . has this post helped redefine or clarify privilege for you? In what ways are you privileged? How will you use these advantages to help yourself and others? Any other thoughts to add to the conversation? Let me know. No one will have access to your email except me, and you can enter a user name if you prefer.

The Privilege of Being Normal, Doug Muder, The Weekly Sift, 7.22.19

The Distress of the Privileged, Doug Muder, The Weekly Sift, 9.10.12

How ‘White Guilt’ in the Age of Trump Shapes the Democratic Primary, Astead W. Herndon, The New York Times, 10.13.19 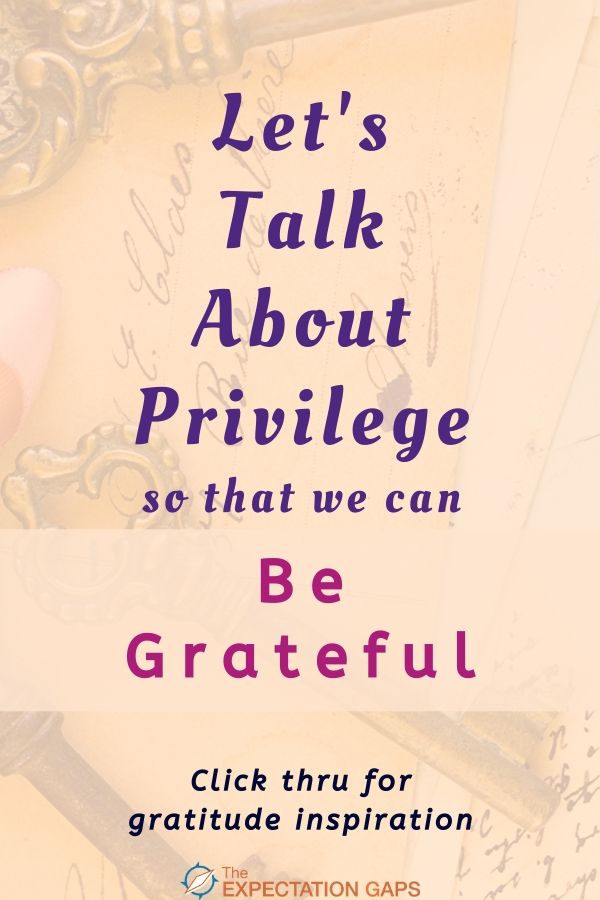 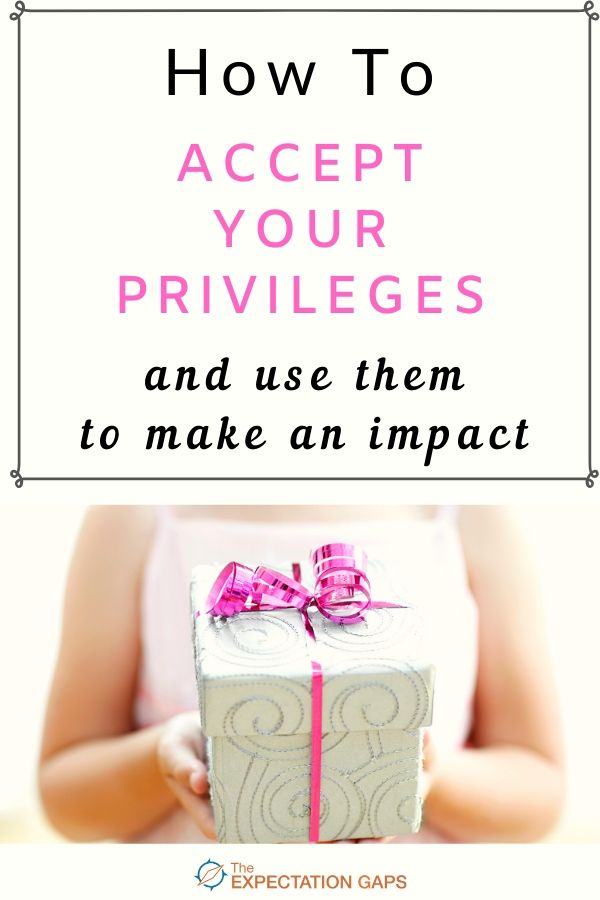